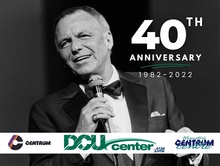 Whether you saw your first concert in the arena when it was called the Centrum, or attended a trade show at the convention center when it was called Worcester’s Centrum Centre, it’s because of YOU that the facility has become a premier entertainment and meeting destination during the past 40 years! So, thank you!

Since Frank Sinatra sang his first notes on opening night on Sept. 2, 1982, and the Worcester Telegram and Gazette ran a headline declaring “No More Little Town Blues,” the facility has been an entertainment and business success. Without the original vision of Worcester’s leadership and the ongoing support and commitment of patrons, fans, government leaders, business partners, our naming rights partner, sponsors, sports tenants, promoters, performers, our management company, and most importantly our dedicated employees, this success would not have been possible!

Throughout the upcoming season, we’ll be looking to celebrate and recognize the past, but we’ll be keeping an eye on the future. Whether it’s been 40 years, 25 years, or a year since you last visited the DCU Center, we look forward to seeing you this season!