"When you sing 'I Am the Fire' and the universe takes it literally," Lizzy Hale – Halestorm

1/21/2022 - Rock band Halestorm rolled into the city Wednesday to play a high-decibel double-bill with Evanescence at the DCU Center Thursday night. While the Pennsylvania rockers were sleeping at the Hilton Garden Inn the night before the show, fire filled their tour bus, parked outside the hotel on Major Taylor Boulevard. 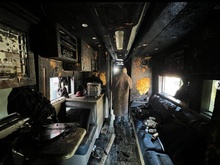 "Old Halestorm had a night for the books. We were all in our hotel rooms last night (Thursday morning) and we woke up to our bus burning down at 3AM," Halestorm’s guitarist Joe Hottinger posted on social media. "Fun fun. No one was hurt."

Firefighters were summoned to the scene. Acting Deputy Chief Adam J. Roche said crews encountered fire coming through the roof vents. The fire was quickly extinguished, and damage was contained to the bunk area of the bus, he said.

“Crews did a great job with quick extinguishment of this fire,” Roche said. In his post, Hottinger praised the Worcester Fire Department.

A video posted online showed flames aggressively billowing out the roof of the bus.

“The Worcester fire department got there and put the fire out. They were amazing,” Hottinger wrote. “Our fearless security Steve pulled guitars and luggage out of the bay. We all lost some stuff, but it was just stuff.”

The cause of the fire is unknown.

“What matters is that no one was hurt,” Hottinger continued. “The best part is that tonight (Thursday), we will rock. Looking forward to playing some music and forgetting about things being on fire. See you tonight Worcester!”

Lead singer Lizzy Hale thanked everyone for their well wishes and reiterated what her guitarist said.

“Like Joe said in his post, we lost some stuff, but so grateful that it was only stuff and no one was sleeping on the bus last night (Wednesday night into Thursday morning),” Hale said. “I’m still shook, and emotions are a bit high today (Thursday). But looks like the universe is not done with us yet!”

Hale also joked about the situation, with a caption on the photo of the interior of the burned bus.

"When you sing 'I Am the Fire' and the universe takes it literally," Hale posted.