The 5 Greatest WWE Moments Witnessed at the DCU Center

Worcester, Ma. is WWE territory and we have the history to prove it. 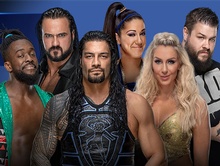 Once again, WWE will return to the DCU Center Arena and battleground for Smackdown Live! The New Day’s WWE Champion Kofi Kingston, Dolph Ziggler, Roman Reigns, Drew McIntyre, and more, will take to the ring on July 16th in what will surely be an event for the ages.

To celebrate the return of one of our most anticipated and knockout events, we’re looking back at the amazing WWE moments that took place right here at the DCU Center.

and Goldust in a cage match.

in what would be his first WWE Championship.

Goldberg defeat The Rock in his first WWE pay-per-view match.

Get your tickets here!