You are probably familiar with the atmosphere of a hockey game – cheering crowds, the smell of popcorn, a chill to the air, and kids catching t-shirts tossed to the stands. Worcester has a long history of hockey teams and dedicated fans, and the story of local hockey has a fresh beginning with the news that a brand new Hockey Club is coming to Worcester; Worcester Pro Hockey HC, the 29th ECHL franchise in the US! 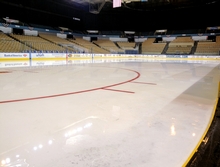 The puck drops in October 2017, which seems like a far away date, but a lot of work goes on behind the scenes when it comes to hockey. A lot of this work comes from our team here in the Operations Department. They are the ones on the ground making sure the arena is ready for the players to do their best. And besides equipment, a coach, and physical training, there is one very important thing that a hockey team needs.

Not so much. Keeping ice indoors is no easy task, especially when our venue is a place for not only hockey, but for concerts, family entertainment, graduations, and more. We sat down with George Sedares, Operations Manager, and Brian Galabinski, Senior Operations Supervisor/ Ice Technician, to find out what exactly it takes.

“Maintaining ice at the DCU Center is a constant process and takes a lot of attention,” Brian said.  “Ideally, I try to make sure the air temperature is between 60-63 degrees and the humidity is between 50-55%. Daily tasks that are completed are ice plant logs and Zamboni maintenance, as well as regular maintenance of the ice surface.”

His typical routine for game day includes a few key steps. He will “edge the rink”, which is using a tool called an “edger” to smooth out the parts of the rink that a Zamboni can’t reach. Think of why you take a weed wacker to the yard – same idea!

He will also take a depth check before everything is ready to go. The actual ice is kept at about ¾ of an inch thick with a surface temperature of approximately 18 degrees throughout the season. But this standard only applies to hockey – figure skating shows such as Disney On Ice require ice that is “warmer and softer” to help make turns and tricks easier. The surface for an event like this will be much thicker, around an inch and a half, and kept at approximately 23 degrees.

“Hockey likes their ice hard and fast so the puck can be shot faster,” said George. 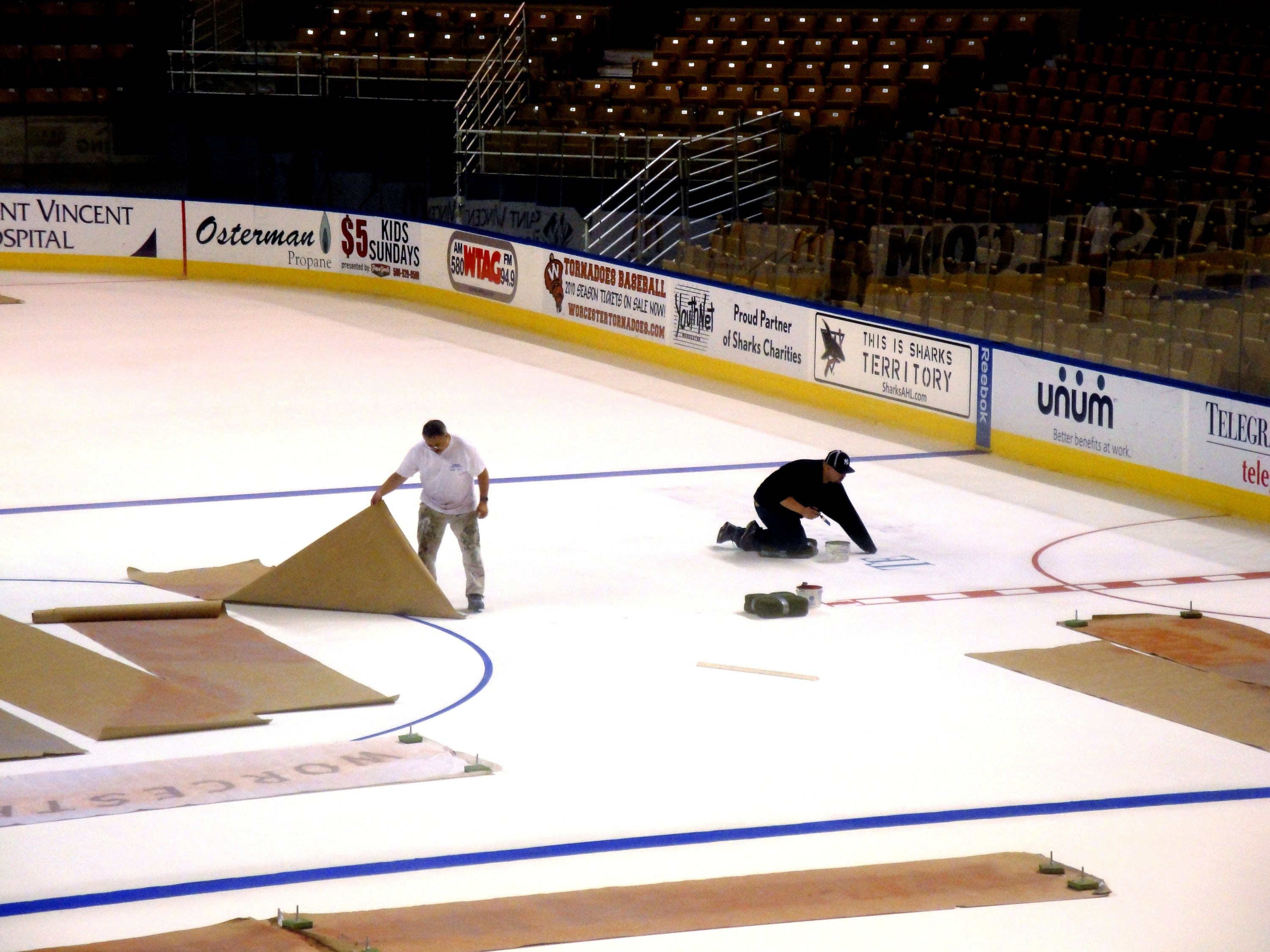 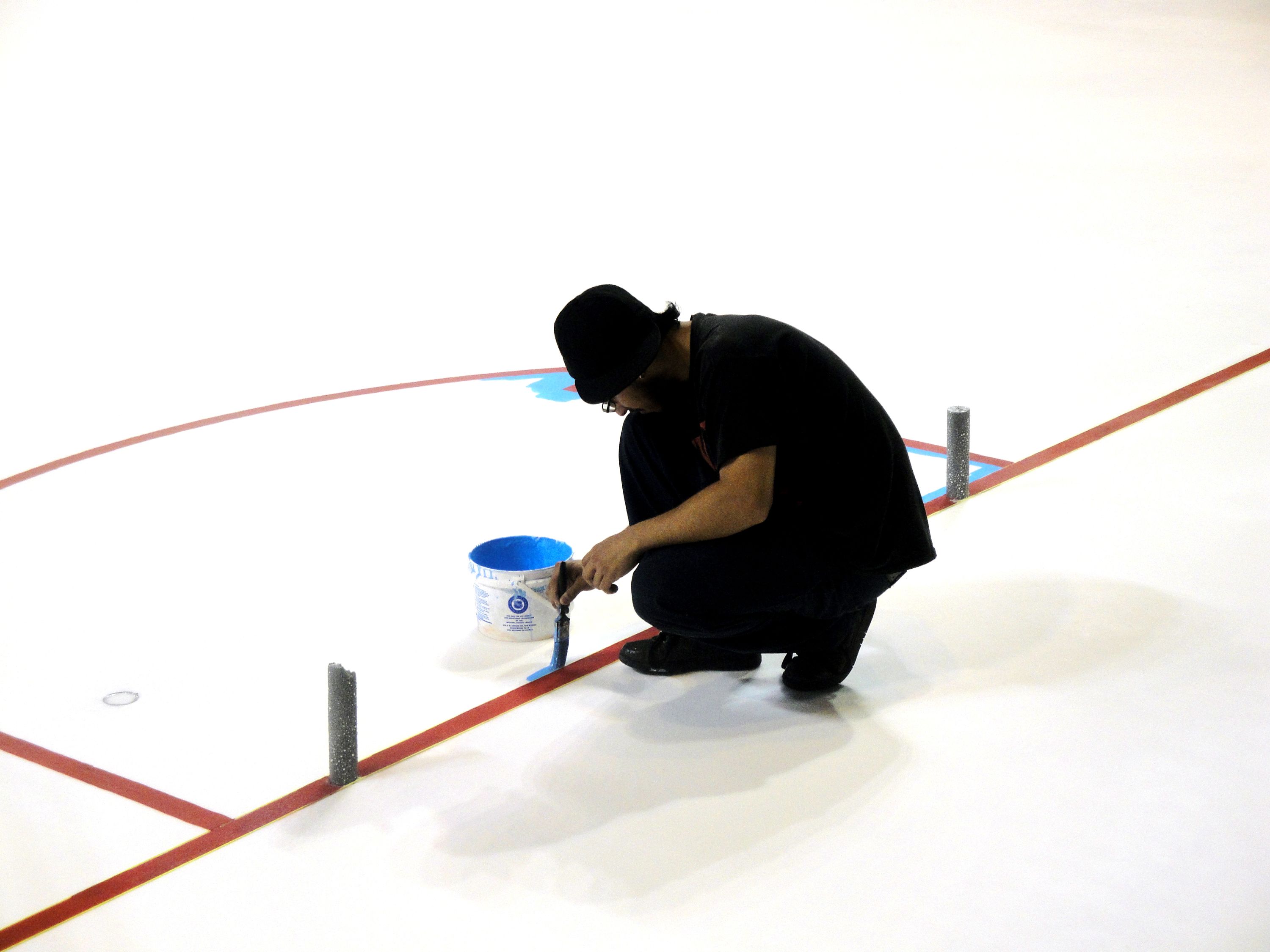 Another element to ice is painting. Logos, game lines, and face-off dots all have to be prepared and measured before the actual painting begins.

“Ice painting usually takes between six and 10 hours from start to finish and is highly detail-oriented,” said Brian. “The timeline depends on how many in-ice logos need to be installed into the ice surface.”

After this step is completed, it will take another 20-30 hours to build up the surface to the appropriate depth.

All of this is just to get the ice ready for a hockey game. The thing to remember is that the DCU Center hosts other events, and the ice is not always taken out for these. “The ice is covered by a layer of decking,” said George. “This is an insulated fiberglass ice deck.” So when you have floor seats at a concert, you might be standing on ice!

Transforming the arena between events often has to happen quickly. “Usually the most challenging thing about a typical changeover is the timeline we have to complete it. The size of the show and how much equipment they are carrying can limit work space, which is why there is always a Plan B and C to get everything completed,” Brian explained.

For example, going from a concert to hockey can take about 48-50 hours to achieve.

First, the chairs on the floor and the stage need to be broken down. “Dashers will need to be re-installed, as well as the team and penalty boxes, and our chute decks,” Brian said. “Next, our tempered glass is installed, which takes 3-5 hours by itself.” Finally, the ice is cleaned and groomed before the team uses it for their morning skate.

Not every event has a set-up like a concert. “If you are going from what I call a ‘dead arena’ to ice, it can take 72 hours,” said George.

A ‘dead arena’ is when the ice has actually been removed and the floor is stripped down to concrete. In order to remove it, hot gas is sent from the ice plant through the pipes, breaking the bond between the concrete and the ice. It is then brought to the ice pit, crushed, and melted. To bring the ice back, everything starts all over again!

Every Day Is Different

George said that variables are constantly changing when it comes to keeping ice and getting the building prepared for different events. There are plans written up for multiple scenarios, but it is impossible to predict the future. Weather and equipment failure are just two of the elements to consider. "I like to always have a Plan D," George said. "In my 30 years of working here, we've only had to go to Plan D once, but it has happened."

All of this planning is part of what Brian enjoys about the job. “The most fun for me is the uniqueness of each day here and all of the planning that goes into everything. I got to know a lot of the guys from the Sharks organization and some other teams while we had the AHL team here,” he said. “I’ve seen former and future NHL players come into the building, and they’ve skated on the ice that I’ve been lucky enough to take care of for the last few years. I’m looking forward to having the new ECHL team and having hockey back in town.”