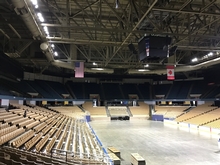 The City of Worcester and the SMG-managed DCU Center announced that a capital lighting project resulting in cost savings, energy efficiency and reduction of emissions has been completed.

John Odell, Project Manager for the City of Worcester, oversaw the project which officially began in February 2016 after being awarded through a city bid process to Anessee Electrical Services Inc of East Weymouth, MA in October 2015. “While the total capital cost for the lighting project was $1,676,000, funding through National Grid incentives and rebates in the amount of $753,379 made the project a more affordable endeavor,” said Odell. “The remainder will be financed through monthly venue billing over the next 3 years.” The monthly costs are offset by the savings resulting in no new costs to the facility.

A total of 3,487 individual lighting fixtures across the complex were re-lamped with LED lights and another 40 completely removed, resulting in a 76.1% reduction in kilowatt usage. “This is a significant upgrade,” said Sandy Dunn, General Manager of the SMG-Managed DCU Center. “An LED lamp has 5 times the life span of other lamps with some being as high as 40 times the life span depending on the specific type. This will reduce our replacement, repair and labor costs dramatically,” she said. All work was done during the regular event season without interruption to facility activity.

The new system includes control centers for both the Arena and Convention Center, giving venue management and its client’s superior flexibility in dimming capabilities. In addition to energy savings, this flexibility provides more dynamic on-demand lighting options for event and meeting planners. The Arena lighting system produces lower temperatures, an advantage in maintaining ice, and a whiter light preferred for digital and high definition broadcast. “The new LED sports lighting will provide our fans and our players with a major league experience at the DCU Center when the Railers hit the ice in October 2017,” said Worcester Railers President Michael Myers. “The lighting system is used by several NHL venues and I look forward to seeing our players skate under the new LED lights next fall.”

Another facet of the project was the addition of occupancy sensors for all fire exits, reducing power consumption from 100% 24 hours per day year-round to 10% when no activity is occurring in these locations.
Additional sensors were added in offices, restrooms and other areas with variable activity throughout the day.

Overall reduction in facility kilowatt usage is projected at 1,868,448 kW, a 42% reduction. That equates to annual CO2 emissions for 194 homes; carbon reduction equal to 1,243 acres of US forests; and the reduction of greenhouse gas emissions equal to 277 cars being driven for a year. “Efficiency standards have grown over the last decade as have people’s expectations of how we use our resources,” said City Manager Edward M. Augustus Jr. “It’s important for the City of Worcester to lead by example and make both financially and environmentally responsible decisions.”