This running list of live streaming events by artists, musicians, and comedians, brings the best in live entertainment to fans listening at home. 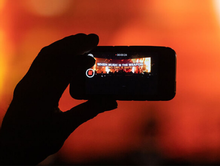 Some of the hottest in entertainment have taken to their social media accounts to live stream events as a way to connect with their fans listening at home. Performances by artists like Niall Horan, Dropkick Murphys, and One Republic, come to us live from remote stages, recording studios, and the comfort of their own homes. Some are creating daily content, like Miley Cyrus and Diplo, who live stream shows on Instagram and YouTube daily—usually with special guests. Now more than ever, live entertainment is truly at your fingertips, and for now, there's plenty more to come.

Don't miss a thing! Here's a list of live events you should totally check out. Updated daily!

Miley Cyrus goes live on Instagram, Monday through Friday, with her show Bright Minded: Live with Miley at 11:30am PT.

For five nights a week, Diplo will take his sets to Instagram, Twitch, and YouTube: Friday and Saturday at 11pm, Sunday at 4pm, and Tuesday and Thursday at 10pm.

John Butler Trio will be playing live from home, every day on Instagram Live at 6pm, West Australia Time (6am ET).

Garth Brooks and Trisha Yearwood  will stream "Live from Studio G" from home on Mondays.

No listings yet. Come back soon!

With SXSW canceled, The Fader Magazine will bring the Fader Fort online on March 31 for a 9-hour broadcast, featuring over 40 performances by both emerging and acclaimed artists. The event will also raise money for various charities that focus on helping the city and people of Austin, musicians, and the entertainment industry. You can find the full lineup (to be announced on March 30) and the entrance to digital Fort here.

For a series titled "In The Lab," country singer-songwriter, Hunter Hayes, will perform 12-15 minute sessions on YouTube Premiere on his channel, March 31, April 7 and April 14. The sessions will feature Hayes building his songs from scratch while on the road every night.

James Corden is hosting #Homefest on March 30 at 10pm ET, with performances by Billie Eilish with Finneas, BTS, David Blane, Dua Lipa, Andrea Bocelli and John Legend. You can catch the virtual event on Facebook, Instagram, and CBS.

iHeartRadio's Living Room Concert for America starts at 9pm ET on Fox or on the iHeartRadio app. The lineup includes Elton John, Alicia Keys, Billie Eilish, Mariah Carey, and others.

The Grand Ole Opry will broadcast live on Circle on March 28. Vince Gill, Amy Grant, and their daughters, Jenny Gill and Corrina Grant Gill, will be featured.

At 5pm CT, March 27, Vanessa Carlton will take to Instagram Live for a performance. It's also the day her sixth album, Love Is An Art, is released.

Dave Matthews played a solo show for the the Verizon sponsored series, "Pay It Foward Live." You can catch the full event on Yahoo and on the Verizon Twitter account.

Dua Lipa celebrated the release of her new album, Future Nostalgia, live on YouTube. She played every song and got personal about her creative process.

On March 25, DJ D-Nice took to Instagram Live with Michelle Obama and When We All Vote for a #CouchParty at 6:30pm ET.

On March 21, Lindsey Stirling performed from home via Instagram Live.

Hozier played a mini gig in a nook at home for the #TogetherAtHome series on March 21.

Kelsea Ballerini played a few songs from her new album on March 20, and even had a few famous guests; like Kenny Chesney and Halsey.

Shawn Mendez and Camila Cobello came together for a jam session on March 20 for the no-contact, #TogetherAtHome concert series.

OneRepublic was live from their living room on March 20 for the #TogetherAtHome concert series.

On March 19, Common performed from home for the #TogetherAtHome concert series.

On March 19, Niall Horan performed on Instagram Live for the #TogetherAtHome concert series.

John Legend, and special guest Chrissy Teigen, were live from home for the #TogetherAtHome concert series on March 18.

On March 18, Charlie Puth performed at home for the #TogetherAtHome concert series.

Luke Combs played a 20-minute set from his garage in Tennessee on March 17.

On St. Patrick's Day, the Dropkick Murphys performed via live stream from Boston.

On March 16, Keith Urban played live from his warehouse and performed his new song, "God Whispered Your Name."

Chris Martin took to Instagram Live to perform a mini gig on March 16.